When a 17-year-old paddleboarder was swept out to sea, his survival depended on his cell phone — and the voice on the other end of the line.

The emergency calls came in a flurry as the weather turned sour along the coast of North Wales. When the last one came, Andy Bolter was the only person in the little operations center who still had an open line. He picked up the phone.

That wasn’t much to go on, but one of Bolter’s colleagues had taken an earlier report of a paddleboarder blown out to sea near Aberdaron Bay, about 15 miles west. So the veteran rescue operator played a hunch.

“Are you on a paddleboard or a kayak or what are you doing at the moment?” he asked.

“I had a paddleboard,” came the reply, “but now I’m drowning.”

You can tell a lot by the tone of a person’s voice and their choice of words. The caller didn’t say he was swimming, or that he was in the water. He said he was drowning.

“I could hear the water entering his mouth,” Bolter recalled later, “He was almost gargling to me at times, and I thought, I’m not leaving this young man. I cannot leave him alone.”

With remarkable calm, Bolter assessed the situation, using his voice to reassure the caller while simultaneously working with his colleagues to coordinate a rescue.

“Your name’s Alfie,” he said reassuringly. “How old are you?”

The repetition had a comforting effect, though it was actually for the benefit of Bolter’s three colleagues in the Coastguard operations center, who were working feverishly to pinpoint Alfie’s location and coordinate a rescue plan.

As they spoke, Bolter learned that Alfie was wearing a life jacket and a wetsuit. This was encouraging news. Without the life jacket Alfie may not have survived long enough to make the call, and the wetsuit would prove critical as the young man waited for rescuers in the 61-degree water.

Critically, Alfie also had his mobile phone in a waterproof pouch. It was his lifeline to Bolter and the others who would come to his aid—if they could find him.

Coastguard spotters searched the water from atop the Aberdaron headland, a sheer limestone cliff rising some 500 feet above the bay. The earlier caller had reported a paddleboarder being swept between the headland and the two islands, the nearest of which is about half a mile offshore. There Alfie was exposed to a trifecta of challenging conditions, including high waves, a powerful outgoing tide and rising offshore wind. These factors also affected visibility. The spotters scanned in vain from the cliff top as a Coastguard helicopter and the Abersoch volunteer lifeboat rushed to the scene.

The lifeboat needed 20 minutes to close the distance, running full throttle in heavy chop. As the 28-foot rigid inflatable bounced west toward the headland, the information Alfie shared with Bolter was relayed to its crew.

“We found out that it was a young lad, that he was 17 and that he potentially wasn’t on his paddleboard anymore—that now he was actually in the water,” crew member Elissa Williams said in a podcast [LINK: https://soundcloud.com/user-279225827/alfie-paddleboarder-episode-one] about the rescue produced by the Royal National Lifeboat Institute (RNLI). “People couldn’t really see him anymore, so rather than an assistance call it was turning into search and rescue,” she said.

A few minutes after reaching Alfie’s last reported location, the lifeboat crew spotted the paddleboard, but the young man was still nowhere to be seen. That fact points out the critical factor that made Alfie’s rescue so difficult: He had become separated from his standup paddleboard.

For all of the factors working in his favor – the life jacket, the wetsuit and the phone linking him to Bolter and a team of determined rescuers – losing contact with his paddleboard put Alfie in grave risk. Paddleboarding experts stress the importance of using a leash to tether the board to the paddler’s ankle. This simple $20 item can be as critical to a paddleboarder’s safety as a life jacket, because the board provides unmatched flotation and visibility. Without a leash, a board can quickly drift out of a paddler’s reach, even in a light breeze. In the difficult conditions Alfie faced that day, a board can disappear in a matter seconds.

Separated from his board, Alfie struggled to keep his head above the heavy waves and became noticeably less coherent as the cold water took its toll. “It started to feel more and more serious as the search was progressing,” Williams said, and when the crew finally spotted Alfie “he was just a tiny little head in the water.”

Bolter was still on the line when the lifeboat reached Alfie.

“I remember listening intently and I could hear a female voice saying, ‘You’re okay, we’ve got you,’” he said. “And from what I understand now, that was Elissa.”
Williams and her teammates pulled the teenager into the lifeboat and began treating him immediately for hypothermia and shock.

“The minute we got eyes on him, we started doing an assessment of what sort of condition he was in. And it was clear that he was doing quite poorly. He’d been in the water quite a long time and it looked like he’d ingested quite a bit of water,” Williams said.

Because Aberdaron is one of the most remote spots in North Wales, the crew decided not to land Alfie on the beach where they might have to wait an hour for an ambulance. Instead they transferred him to the Coastguard helicopter, executing a seamless hoist maneuver with both craft underway. Alfie was in the hospital within minutes, where he was assessed and released the same day, safe and well.

The rescue received a good deal of attention, thanks in no small part to the gripping audio of the call. Williams says she cried when she first heard the recording, in which Bolter uses his voice to comfort and reassure Alfie. When podcast host Jasmin Downs thanked him for his role in saving the teen’s life, Bolter was quick to share the credit. “It was an all-around team effort, with Elissa, the Coast Guard rescue teams, everyone,” he said. “Alfie himself as well. He did everything right that day.”

Although he did lose contact with his board, Alfie was able to survive and summon help thanks to his life jacket, wetsuit and the mobile phone he kept in an inexpensive waterproof pouch.

“Alfie, he was an absolute star,” Bolter said. “I would say he was very brave that day.” 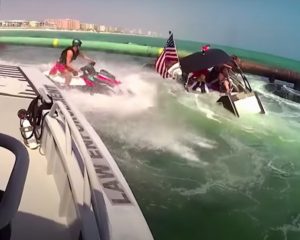 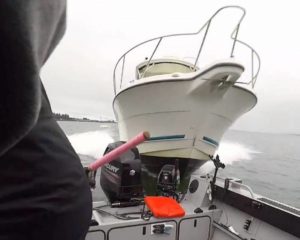 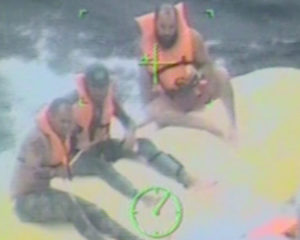